"We make available everything we can. History is a property owned by all of us, not only the historians." -- Ivo Schwarz, former director of ÚZSI (2007-2014, at ÚZSI for 15 years)

Thanks to some help from the Czech Security Services Archive, Office for Foreign Relations and Information (ÚZSI) and Petr OK1PM of zelenavlna.com we are releasing a unique Czechoslovak State Security document about a device that used to run the StB's and later ÚZSI's Number Stations in the 1980s and 1990s.

Priyom (well, me) has recently asked the Czech Ministry of Interior, the Archive and ÚZSI for any relevant information and files about shortwave broadcasting of numbers, and indeed, Interior told us Czech Intel was behind S05b OLX, and today we bring even more information from the government.

As this particular document was created before 1. 1. 1993, the original "TOP SECRET" classification could be cancelled and you are now one of the first people in the world who finally have free access to some of the interesting details behind the scenes of the S05b OLX and S10b Bulgarian Betty stations.

Not a word was spoken about this device outside the Czechoslovak and Czech Intelligence Service until now.

Number Stations themselves do not seem to have a definite word for them in the Czech language, instead the umbrella term "Agency Link/Connection" is used, which describes all methods to contact the agents, such as radio, dead-letter box, VHF, courier, etc.

Enjoy, and thanks to all people involved, not just Petr and the Archive, but also to the Czech Ministry of Interior and Czech Foreign Intelligence for their openness and transparency about this subject, unlike some other secretive nations, which do not respect their own citizens' rights to information.

It has been 7 years since the Czech Republic has stopped its shortwave numbers transmissions, when M10, S10d and S17c disappeared on 20th June 2007.

Subject: Analysis of operative situation of 1st Administration's agency link with the requirements of further improvement in the quality of messages transfer

Current state of the agency link:

The BRIGITA device supplied by 6th Administration is installed at the central in CSSR.

This device allows to perform modulation of transmitters in transmitter centers according to a time plan through the use of modulation channels /line, hf transmission path/. Modulations used are A1, A2, A3, where for A3 operation the BRIGITA device is equipped with a speech synthesizer. On the recipient's side strictly an average commercial receiver is used. Under these circumstances, with adequate choice of operated frequencies, more than 90% connection reliability is achieved with A1 and A2 operation, whereas with A3 operation the reliability of connection is about 65-70%. This difference is caused mainly by low readability of single transmitted characters /digits/ on the receiving correspondent's side. We can say, that readability of characters at the synthesizer's output is generally higher than on the correspondent's side, however it still contains disruptive noises and sibilants. This signal is then unfavorably affected by the transmission lines and the following highfrequency path.

Requirements to solve the problem:

1/ Based on agreement of 6. 10. 1988 with regards to the expected costs and the development realization time we do not require the development of a new synthesizer, because we cannot ensure its further usability in a system, by which we expect to replace BRIGITA after the end of her [its] lifetime.

2/ Possibility of modifications to the transmitters in the transmission centers themselves cannot be assumed /supplied by a DDR manufacturer/ nor the possibility of a further signal adjustment at the receiving correspondent's side.

3/ Every, even small, improvement of the signal readability will improve the link's reliability, especially for longer distances.

4/ We recommend to solve the following areas of problems:

a/ Modification of signal at the current synthesizer, BRIGITA, with the goal to maximally limit disruptive elements worsening the readability of the output signal.

b/ Perform analysis of additional noises, interference and other negative effects, which influence the signal readability during transfer between our central and the correspondent /modulation channels, transmitter, transmission hf line, commercial receiver/, based on this analysis suggest and realize modifications of the modulated signal in a way, that would in the maximum possible manner compensate and restrict these negative effects. These results can then be used even in a new system's development, which will replace the BRIGITA device in the future.

c/ Consider the option of obtaining a new digitalized recording of speech used in BRIGITA synthesizer optimized with regards to limiting interfering disruptive noises and sibilants. In the event of a success replace current memories in the synthesizer with new records with better intelligibility. 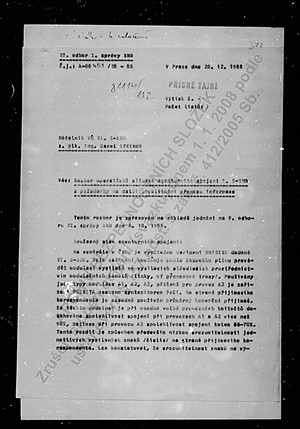 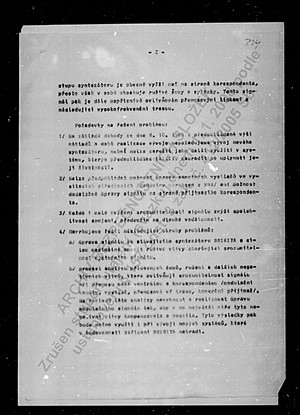