2 buzzers can it be?

There has long been speculation that there are 2 or more transmitter sites for the buzzer. Conflicting reception reports, people saying the buzzer did not switch off when a message occured and other reports have often left us scratching our heads in explanation. Yesterday we heard a test count broadcast on the buzzers frequency while the buzzer was still running. This could be mixed at the broadcast source of course and offers no proof... until today! 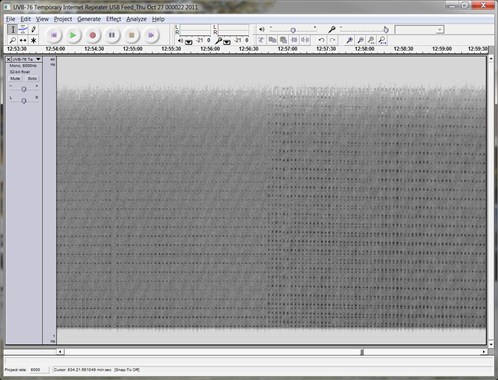 We can clearly see in the above spectrum image a second buzzer being activated which is slightly off frequency and slowly creeps onto the 4.625 kHz expected.

We finnally caught them! This is fantastic news as it explains many oddities about the buzzer and casts doubt on a few. As always UVB-76 never fails to suprise and we are slowly learning more and more secrets about it. However this makes triangulation twice as hard...