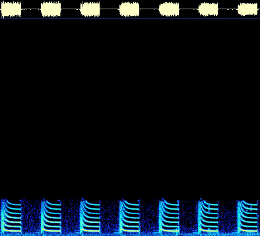 "The Air Horn" is a Russian military commandment network serving the Western Military District. It transmits on 4930 kHz around the clock. For more than 5 years, apart from test counts, call checks and other technical tests, it had not been heard with any apparent actual traffic, until September 20, 2022 - one day before Russia announced partial mobilization for the war in Ukraine. Its traffic is apparently addressed to Нева-100 (Neva-100).

On December 11, 2019, the channel marker suffered a breakdown - experiencing repeated malfunctions throughout that day - and remained off air until it returned on January 16, 2020, still on 3510 kHz. On September 14, 2022, the station moved again, to 4930 kHz; before transmitting its first known actual messages the following week starting on September 20, 2022.