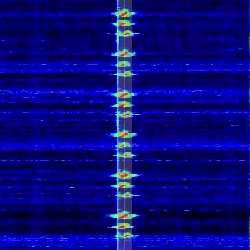 E06 is the English language mode of the Russian 6 operator.

E06 schedules consist of 2 identical transmissions 1 hour apart. The latter transmission is 1-3 MHz lower or higher in frequency. In case traffic was sent, the two transmissions are usually also made the next day, at the same times and frequencies. In case of interference on the planned frequency, E06 may broadcast up to 20 kHz away instead.

E06a is a message format containing exactly 2 groups as follows: