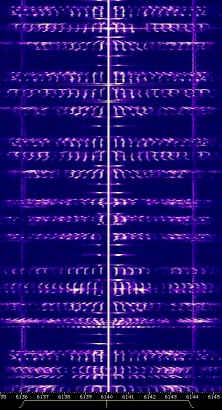 E25 is an Egyptian number station.

The music intro used depends on the ID. For example, the ID's in the 83# range use the Umm Kulthum song "انت عمري" (Enta Omri). Another common Umm Kulthum song used as the intro is أروح لمين (Arouh Limin). Sometimes pieces of music can be heard after or during a transmission, or even as standalone transmissions with no message to follow. In this last case, they are believed to be test transmissions and they have a more extensive music library, although the artist is almost always Umm Kulthum.

E25 uses 2 timeframes for its transmissions: 700-1200 UTC on 6140KHz and aimed at Middle East, and 1200-1500 UTC 9450KHz aimed at southern Europe. There seems to be a relation between the start time of a transmission and the ID used, transmissions using the same ID usually transmit at around the same time (see this page).

Transmissions on E25 are very erratic and filled with mistakes, which in some cases may lead to an unreadable copy. Mistakes include, but are not limited to: transmitting the wrong message for the wrong ID and at the wrong time, transmission breaks and restarts, computer sounds and mistuned transmitters.

The station uses a computer running Windows 7 to generate the numbers and music, and the audio from the stereo mix driver is fed directly into the transmitter. This causes a large amount of sounds being leaked into the transmission, ranging from Windows sounds (including sounds from built-in games like Spider Solitaire), to Quran reciting and music. When the transmission is made live, however, no sounds from the computer are leaked; instead, distant chatting or paper crumbling from the operator can be heard if the reception is good enough. Live operators also tend to swap the order of digits due to right-to-left reading in Arabic.

E25 was first reported in January 2001, initially using live male (and occasionally female) operators. In fact, one of the female operators donated its voice to create the current automated female voice.[2] In 2007, the current automated voice was introduced, and at the same time the E25b variant ceased to exist in favor of this new system. The automated voice was initially created using a computer running Windows 98, which was upgraded to Windows XP in late 2010[3] and to Windows 7 in early 2016. Nowadays, live operators are sporadically used for transmissions.

Up to at least 2014, the music used as intro was played back from tapes, which were occasionally heard being played fast-forward. Nowadays the music also comes from the computer generating the voice.