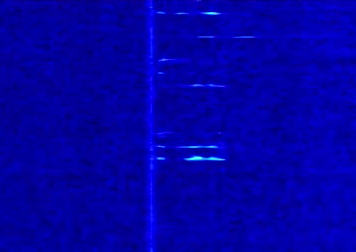 V07 is the Spanish language mode of the Russian 7 operator.

In case of an unexpected interruption during the transmission, the station restarts with the intro, repeated for one minute, followed by the current message continued from some groups before the failure; the preamble is omitted.

The sole V07 schedule consists of 3 identical transmissions 20 minutes apart. Each successive transmission is 1-2 MHz lower or higher in frequency. The third transmission does not take place in case of a null message. The frequencies are typically changed on a monthly basis.

V07 was first noted as early as 1995, using a male voice. Initially, it was based in Europe, with schedules on Monday & Friday starting at 20:00, and Tuesday & Thursday starting at 06:00, as of 1999.[1] On 6 February 2001, V07 gained a new female voice; the voice of its sister station E07 also changed at the same time.[2]  The emission mode at the time was AM, with the voice pitched up by one semitone and slightly sped up, which was typical for this agency's AM transmissions until March 2018.

V07 has not operated any European regular schedules since 2007. In 2011, it resurfaced on a new schedule based in Khabarovsk, using USB mode. On 27 March 2012, V07 made two appearances in Europe, at 07:10 and 07:30 respectively, with a different voice and a 30-group message. However, it has not been heard on this slot since.

On 21 June 2017, a Moscow-based test transmission of V07 was made on 10256 kHz[3], a known Russian 7 test frequency, featuring a new voice and a new speed. Following this test, this new voice and speed were introduced on the usual Sunday schedule on 2 July 2017. At the same time, the schedule also received its first major revision, with new frequencies and reorganized time slots.

Since December 2017, V07 transmissions contain an AM crosstalk at +3 kHz within its signal. It has been identified as Radio Vostok Rossii, a commercial broadcaster based in Khabarovsk. The same broadcaster is leaked on V07's tune up carriers as well.

In September 2021, V07 transmissions were heard from Moscow, featuring apparently yet another new voice. The transmissions used H3E USB mode - with cleanly suppressed LSB - which departs from normal, or even test, Russian 7 operations. On 13 October 2022, again from Moscow, V07 was transmitted using AM mode and its current production voice in Khabarovsk.