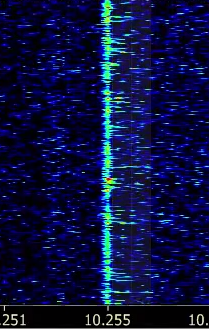 Like M97, the whole message was repeated several times before finally shutting down. Transmissions in total lasted around 30 minutes. Messages were sometimes reused for months and even years.

V30 had only one schedule, which was very erratic and did not always transmit. It transmitted at 16:00 UTC on 10255. The computer clock used for the transmissions was inaccurate and every day the transmission start shifted a few seconds before the intended time, thus reaching start times as early as 15:54 before the clock was put on time again.

The voice used changed several times during its lifetime. It started as a live or prerecorded male and female, and noises like traffic sound could be heard on background. It later changed to an automated voice.

Document about V30 on N&O: http://www.numbersoddities.nl/V30-profile.pdf