V07 is a present-day glimpse back to past times when big numbers station families, featuring many variants in different European languages, could be heard on the air: German, Spanish, French, Polish, and even Hungarian or Bulgarian. Nowadays, apart from Cuban intelligence unsurprisingly using Spanish like in HM01, the only two remnants of those times are G06 in German, and one single schedule of the Spanish-language V07.

The last numbers station variant using Spanish: that in itself gives V07 a special charm. But it also has another peculiar aspect. With E07, M12 and XPA2 among others, it is part of the station family run by the Russian 7 operator, a moniker for what we believe could be the Russian civilian intelligence agency SVR (see our full dossier). Their transmissions are mostly operated from the Moscow area; that is, apart from two schedules: one M12 schedule, and the single V07 schedule. These two are instead transmitted from the Russian Far East, over the Pacific area; in the case of V07, the Spanish language lets us presume that the target would be somewhere in Latin America. Today, we tell you the story of how we have confirmed and pinpointed the origin of these two, V07 and M12 schedules to the city of Khabarovsk. 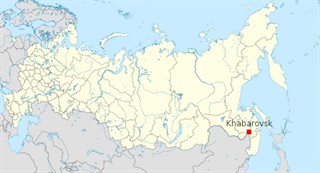 The current V07 schedule over the Pacific appeared in 2011, but our investigation really picks up in December 2017: a strange 3 kHz tone appeared in V07 transmissions. Upon further scrutiny on weeks where that signal was especially strong, we realized that this 3 kHz tone was in fact the carrier of a faint AM signal, embedded in V07. The modulation was weak and garbled under V07's numbers, but there was the voice of an announcer who sounded Russian, and at times music: we thought it sounded like some Russian commercial radio station, but what was it doing there? Was it leaking into V07 through some kind of crosstalk? 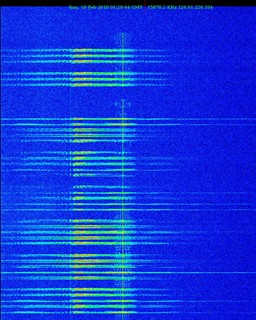 Then a second event a few months later was instrumental in our investigation: a new KiwiSDR receiver turned up, located in Khabarovsk. We're always happy to see new receivers in areas that are underrepresented in the KiwiSDR network, like Asia, and this one comes in rather handy as it generally offers a good reception of the various East Asian numbers stations.

But when it came to trying V07 on it, it was on a whole different level. The signal was extremely strong, with many spurious copies, and with each number spoken by V07 splattering across the whole HF spectrum; and also revealing every little defect of the transmitter as soon as the operators tuned it up, even minutes before V07 started: every TX noise, hum, suppressed carrier or other artifact that would be otherwise imperceptible on other receivers; and of course, the AM crosstalk at +3 kHz, now much stronger and much easier to discern and work with. Have a listen at this recording from July 1st, 2018:

You can clearly hear a strong transmitter hum, a 3 kHz tone which is the AM carrier of the crosstalk, and undemodulated music from the radio station under the digits.

And then we were just lucky. After V07 ended, right after this recording, the transmitter stayed up for a minute before the operator tuned it to the next frequency. The unidentified radio station was still leaking through at +3 kHz, and it was even easier to listen to without V07 on top of it; when the announcer outright gave the name of the radio station, before starting a new song, here at 0:06 in this recording:

One of our Russian-speaking members could identify this: it's Radio Vostok Rossii, a Russian commercial station broadcasting on 765 AM and 103.7 FM, whose headquarters are based in... you might have guessed it - downtown Khabarovsk.

From there, it was easy to compare this crosstalk against the live audio of the official broadcast, to thoroughly check and confirm that it was as a matter of fact Radio Vostok Rossii leaking in real time into numbers stations. And actually, there are three different ways in which it leaks in. The first one, the most obvious, is through that strange AM crosstalk at +3 kHz in V07. The second one is through the other Pacific schedule, which we mentioned above, of V07's Morse sister station M12. This M12 schedule comes in just as strongly as V07 on the Khabarovsk receiver, with the same level of noise and artifacts. However the Radio Vostok Rossii crosstalk manifests in the weirdest view: the dashes and dots of the Morse code act as an intermittent AM carrier, resulting into the crosstalk audio being carried as an AM signal that is completely chopped up to the rhythm of M12's Morse code. Just see for yourself: 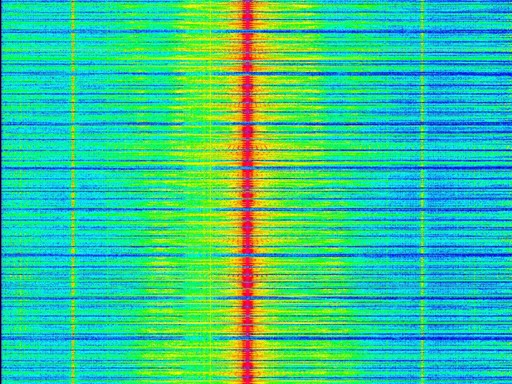 Finally, the third way in which the crosstalk shows up is a new explanation for an old phenomenon. It is customary for this intelligence agency to tune up their transmitters roughly 10 minutes before scheduled transmissions, and perform some warmup testing by sending a few short tones. As for these two Pacific schedules, it has long been observed that in addition to these tones, they also use short music transmissions in AM as part of their tune-up procedure; or at least, that's what was believed; because personally all the times I tried to tune in and listen to that music for myself, I always found that the modulation was very faint and the music really hard to hear at all, even if the carrier signal itself was strong: so I always figured that something didn't add up quite right there.

But armed with our new discoveries, we were able to check and indeed confirm that this music was actually audio from Radio Vostok Rossii. And the reason why the modulation gets so faint and hard to hear, might be that contrary to what we could simply think before, this music is not used as intentional audio content for the warmup test: it would merely appear as the result of unintentional crosstalk.

In 2013 there were precedent efforts to determine the origin of V07 using multilateration from the US: these efforts yielded a location in the Sea of Okhotsk, west and just short off the Kamchatka Peninsula. This gave a general area in the Russian Far East, but was probably inaccurate and approximate at best due to the distance. With the new elements that we found, we can now trace it down to Khabarovsk with enough certainty. We did also try to take advantage of the recently-added TDoA multilateration feature of the KiwiSDR network, but unfortunately good GPS-enabled receivers suitable for TDoA are fewer in East Asia than, say, in Europe, and their geographical distribution is too uneven to produce really good results; so this is the best we could get: 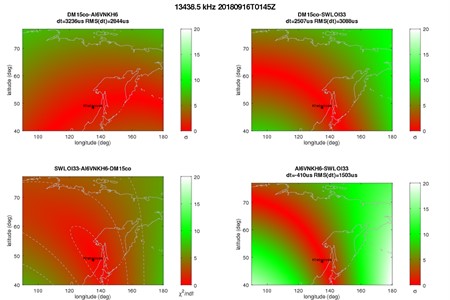 One thing that we still don't know for sure is what connection exactly to infer from the crosstalk between the signals. Radio Vostok Rossii maintains a fairly large infrastructure, with more than 20 AM or FM transmitters across the region. In theory there are many points on the transmission chain where the crosstalk could occur. Maybe Russian intelligence shares one of these antenna sites with the commercial broadcasters? Maybe there's a signal leak into a microwave relay? Maybe V07 operators like to listen to Radio Vostok Rossii all the time, maybe the strong signal overloads some circuit? Maybe they share facilities with Radio Vostok Rossii's production studio, or maybe they're just neighbors?

We don't know. But one thing we know is that this case is not unique in the world of numbers stations. For example, we believe that Cuban intelligence uses for their shortwave operations the same facilities as their state-run radio station Radio Habana Cuba: the latter can occasionally be heard by mistake at the beginning of HM01 transmissions. Just a few weeks ago, in the evening of October 2nd, Radio Habana Cuba was transmitted for a whole hour instead of HM01, during that whole schedule slot! Interesting mistake! But in my opinion it doesn't beat Radio Vostok Rossii leaking under numbers stations.

If you want to listen for yourself to that last remainder of Russian intelligence's elusive Spanish voice, and try to catch that colorful crosstalk, V07 is on every week on Saturday night or Sunday morning, at varying times during the year: you can pick a receiver in the Pacific area using our map, or just click this link to our automatic dispatcher. And don't worry! We don't believe V07 is going away any time soon. It is still actively maintained: just last year in July it received new voice samples, with digits clearer to understand; which was followed by a major change and reorganization of its schedule. And it seems they're updating the schedule's frequencies yet again this year! Numbers stations may be old technology, but proven designs die hard!