At the turn of the new year it is not uncommon to see numbers stations schedules, that haven't sent any actual message in a long while, get definitely retired for the occasion and stop transmitting altogether.  This year again, 2020 brought us its number of inactive schedules that were taken permanently off the air: two G06 and two M14 ones, and what's peculiar about them, is that they were all transmitted from the same somewhat infamous communication hub located somewhere around Smolensk, in western Russia close to the Belarusian border. 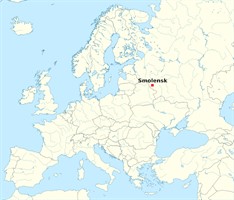 The Russian 6 numbers station operator is presumed to be a major Russian intelligence agency with lots of resources. It operates shortwave transmission facilities in many places across Russia: Moscow of course, but also Smolensk, Orenburg, Chita in the Russian Far East, and there is even one in Cuba. Transmissions can be matched to one of these source hubs rather obviously through direction finding and triangulation, or TDoA multilateration; but when you get to know them, each hub is also recognizable by slightly different operation and test procedures, specific transmission modes or particular transmitter noise and artifacts.

And maybe you've heard this one before: the Smolensk hub regularly leaks Windows XP shutdown sounds onto the air, after the end of number transmissions.  Here's what we believe is going on in that hub: voice transmissions are generated with some software running on a Windows XP computer - this software would take the numbers transcript entered by operators as input, and play back the corresponding voice samples in the right order; and the audio from the computer's soundcard is simply plugged from its line-out jack right into the shortwave transmitter. After the last transmission at the end of the day, the operators call it a night and turn the computer off from the Start menu, without disconnecting its audio from the transmitter: and so the Windows XP shutdown is played back onto the air, followed by, if you listen carefully, a bit of ground loop hum as the computer powers down. Check out this typical example below:

Up until this year, this Smolensk hub was still running nine schedules, all analog modes: one E06 voice schedule, three G06 voice ones and five M14 Morse ones (and none of the digital F01 or F06 counterpart stations of this agency). Four of them just got retired: G06 ID 329, G06 1st/2nd Monday, M14 ID 735 and M14 1st/3rd Tuesday. These schedules only saw infrequent or even rare traffic - a few messages a year at most; and none had sent any message in a least a year. So it is not so surprising to see them disappear; but we didn't expect all of them to go at the same time.  Curiously, three of those four schedules still transmitted as planned just for the first week of January, some even receiving new frequencies as usual. This perplexed us a bit, but after a month now, it seems like despite this, they have indeed gone down with the new year.

What's more, is that the only schedules now left operating from the Smolensk hub form a strange network that sends apparently fake traffic, or at least traffic of dubious value, sometimes reusing identical messages for years at a time, or with number sequences looking like they were not quite randomly punched on a keypad by a bored operator. Maybe you have already noticed these transmissions in our numbers station schedule: they are the ones tagged with the "(Fake messages)" mention. And by contraposition, this would also mean that the Smolensk hub curiously ceased transmission of all its "real" schedules...

Coming back to this article's title, what's worrying about the few numbers station transmissions using the German language, is the way they keep on getting fewer. When the Polish G11 station was retired in 2014, G06 became the last station still using German. It was only operated from the Smolensk hub anymore, and with this year's closure, it is now down to a single, last schedule. For now, you can still listen to it every other week, on the 2nd and 4th Thursday of the month at 18:30 UTC, and the following Friday at 19:30 UTC. Considering this last schedule is even fake traffic, your guess is as good as ours whether this means that it is expendable and might also disappear, or that it has no reason to change and is safe.

Don't worry too much though; goodbye isn't forever. Despite having no regular transmissions in 20 years, G06's Spanish-speaking sister station V06 made an appearance on the air again just the other week! This was on January 29, for a test transmission using known test frequency and ID:

Even if G06's last schedule came to disappear, in many ways it wouldn't be its end.