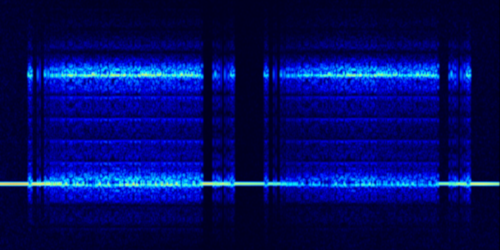 F06 is a digital mode of the Russian 6 operator. It utilizes a custom FSK system.

F06 messages consist of 5-digit groups. They begin with 5-group headers using the same link identifiers as messages sent via two-way communications with Russian diplomatic missions, implying that they are their intended targets.

Most messages begin with the group "11166," implying a text message of urgent priority. In null messages, the 5-group header is followed by three "00000" groups. Actual traffic ends with a group made of a 2-digit serial number + 3-digit group count. The serial number ranges from 01 to 99 inclusive, increments by one with each new message, and wraps around.

The regular schedules of F06 consist of 3 identical transmissions 10 minutes apart. Each successive transmission is 1-3 MHz lower or higher in frequency. When traffic is sent, the three transmissions are usually also made the next day, at the same times and frequencies. Test data is broadcast 10 minutes before the first transmission, consisting of an ASCII-encoded "464646" string.